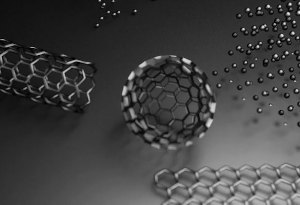 Graphene is the name given to a flat monolayer of carbon atoms tightly packed into a two-dimensional honeycomb lattice, and is a basic building block for graphitic materials of all other dimensionalities. From the point of view of its electronic properties, graphene is a zero-gap semiconductor, in which low-energy quasiparticles can formally be described by a Dirac-like Hamiltonian.

Our group has proposed a quantum interference device based on a graphene nanorings. The superposition of the electron wavefunction propagating from the source to the drain along the two arms of the nanoring gives rise to interesting interference effects. A side-gate voltage applied across the ring allows for control of the interference pattern at the drain. The electron current between the two leads can therefore be modulated by the side gate. The latter manifests itself as conductance oscillations as a function of the gate voltage. The proposed device operates as a quantum interference transistor with high on/off ratio.