Friction at the nanoscale 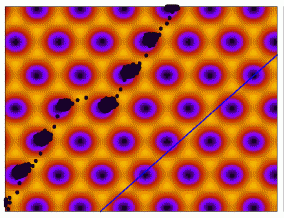 Nanotribology is science that studies adhesion, friction, wear, and lubrication phenomena at small scales. The understanding of friction at nanoscale is a current important problem from both a fundamental and a technological perspective in wide ranges of length and time scales. Thanks to the development of new experimental techniques, experimental and theoretical studies of friction at the atomic scale are now receiving renewed attention.

In particular, we are interesting to study frictional phenomena at atomic scale by using nonlinear dynamics models like the well-known Prandtl-Tomlinson (PT) and numeric simulation. In this level of approximation, a tip of Atomic Force Microscopy (AFM) that is dragged over a surface in a typical nanotribology experimental setup is modeled as a point mass connect by a spring to a mobile support with constant velocity. This kind of approximation allows us to analyze the main properties of the system (the Force velocity and temperature curve, for instance) by including the most relevant degree of freedom (minimalistic model).